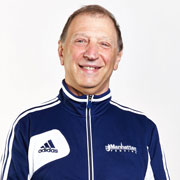 Maestro Yury Gelman was inducted Into U.S Fencing Hall Of Fame on July 10 at the 2010 Summer National Championships in Atlanta.

His students won gold, silver and bronze at Cadet and Junior World Championships and countless medals in junior and senior World Cups, including individual and team Grand Prizes. He prepared members of Cadet, Junior, and Senior National teams every year since 1995.

Over the past twenty-eight years, Yury has prepared 33 students for the United States National Teams.