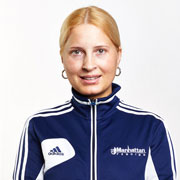 Coach Nellya Sevostyanova started fencing at the age of eleven and was a professional fencer for around twenty years. She was participated in seven World Championships, medalist at numerous Continental Championships in addition to participating in the Sydney, Olympic games in 2000.

Nellya received her Master Degree from the Kazakstan Institute of Physical Education. She started her coaching career in 2004 at the Fencers Club working with one of the most successful foil instructors in the United States, Buckie Leach. They produced many Youth, Cadet, and Junior National Champions in addition to over 100 National medalists.

Nellya started working at MFC in 2008 and has started to raise many International, National and Regional medalists. She has been an assistant coach for St. John’s University from 2009 to 2015 and prepared bronze medalist of NCAA individual competition, Evgeniya Kirpecheva, in 2010 and 2011 and Marta Husman 2015

In 2010 and 2011, Nellya has been working as a National Coach with the US Cadet National Team.