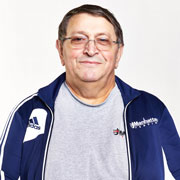 Coach Misha Shimshovich graduated with a Masters degree from the Kiev Institute of Physical Education in Ukraine. He was a member the Junior and Senior Ukrainian National Team and a member of USSR Junior National Team. Misha earned an Honored Coach of Ukraine title in 1993, which is an official recognition of coaching achievements.

He was the first one to organize a fencing program for kids as young as 6 years old in Kiev High School 77. This program produced an Olympic Champion, Vadim Gutzaik, and many National and World Champions for the years to follow. As head coach of the Ukrainian National Team, his students included George Pogosov, winner of the 1992 Olympics in Madrid.

In addition to MFC, Misha is the assistant coach for the St. Johns University 2001 NCAA Championship Team and organized an adult beginner program at the Fencers Club which was listed in the New York Times in 2006. He has numerous current students who are medalists and winners of National Championships and were finalists at the Veteran World Championships in 2014 and 2016. In addition, numerous of his students have been accepted to the best universities in the country including Yale, Stanford, Brown, Columbia, University of Pennsylvania, Princeton, and many more.