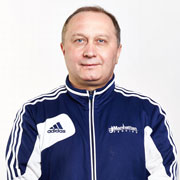 Coach Andrew Lamianski started fencing at age 8 and was a competitive fencer for fourteen years.  He was a member of the Belarusian National team from 1981 to 1987 and won the National Championship three times during those years. He took part in many National and International competitions including Senior World Cups.

In addition to training, he studied in the State University of Physical Education and Sport Minsk (Belarus) where he was distinguished as an extraordinary person in the area of physical education and sports. Andrew is familiar with many related to physical training and sports such as physiology, psychology, human anatomy, biochemistry, etc. Upon graduation, he took postgraduate courses and defended his Ph.D. dissertation.

He started his coaching career in 1988 as a coach at Belarusian school of Olympic reserve. Since 1995 Andrew was one of the National team coaches who trained many winners of National, European, and International championships:

In August 2001, Andrew came to United States and continued his work as a head saber coach at Medeo Fencing Club. He is also the head fencing coach at the Ridge High School in New Jersey. In 2009 , Andrew joined Manhattan Fencing Center. During his work in the United States, Andrew prepared 4 members Cadet National Team USA and his students won more than 150 medals in National and international competitions.